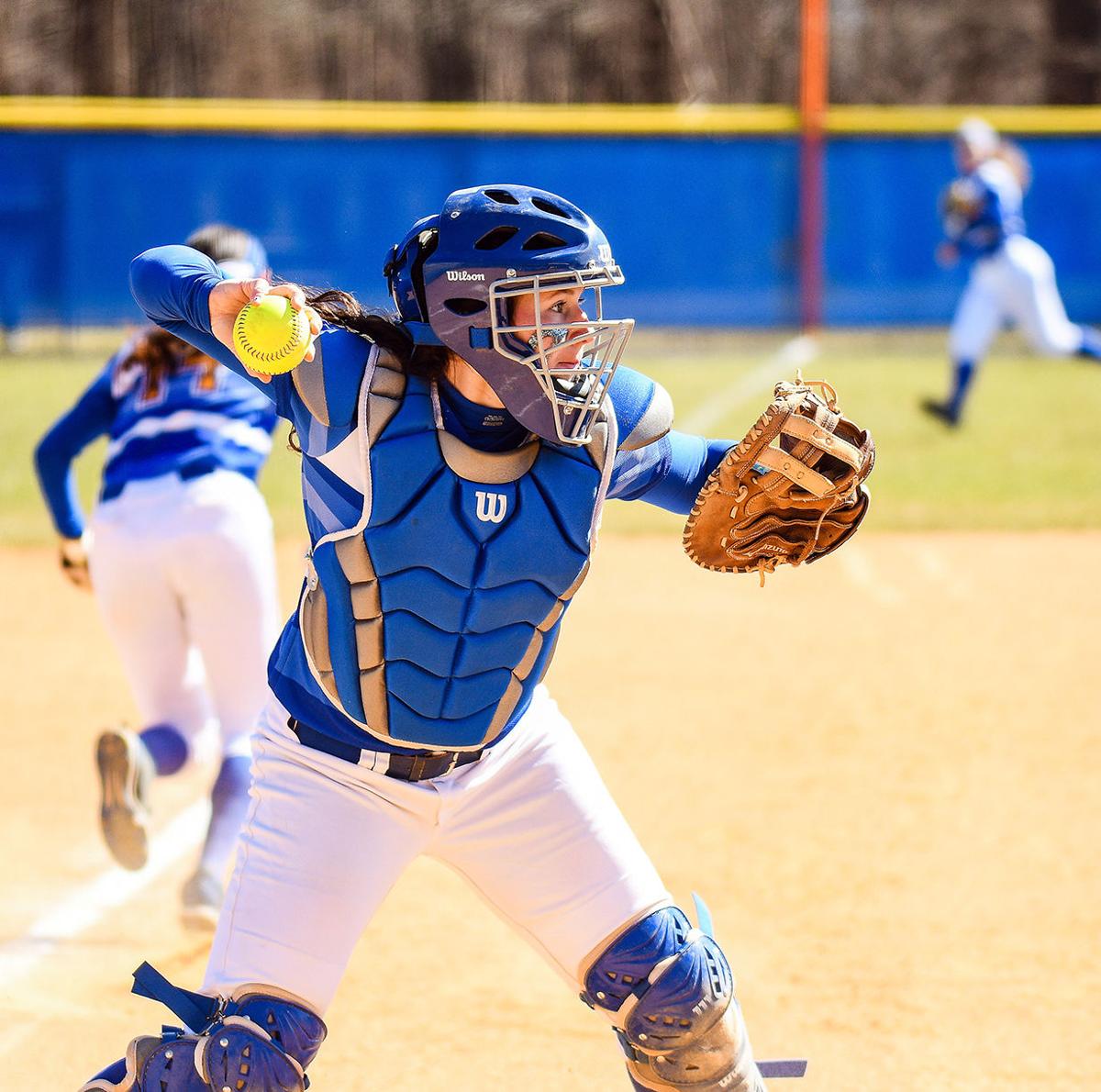 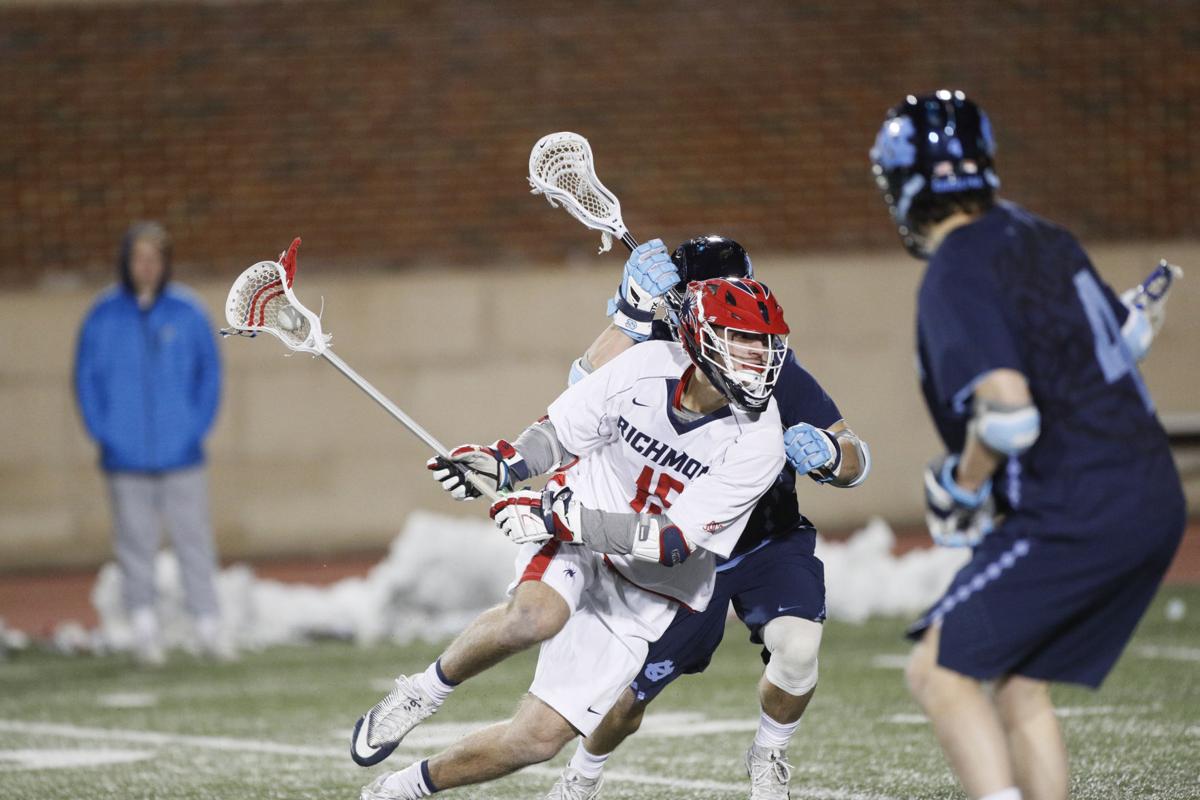 Mitch Savoca (Newtown/Fairfield Prep) scored a hat trick as the University of Richmond opened its season Saturday by taking on fourth-ranked Maryland and extending the Terrapins into overtime before losing, 14-13. 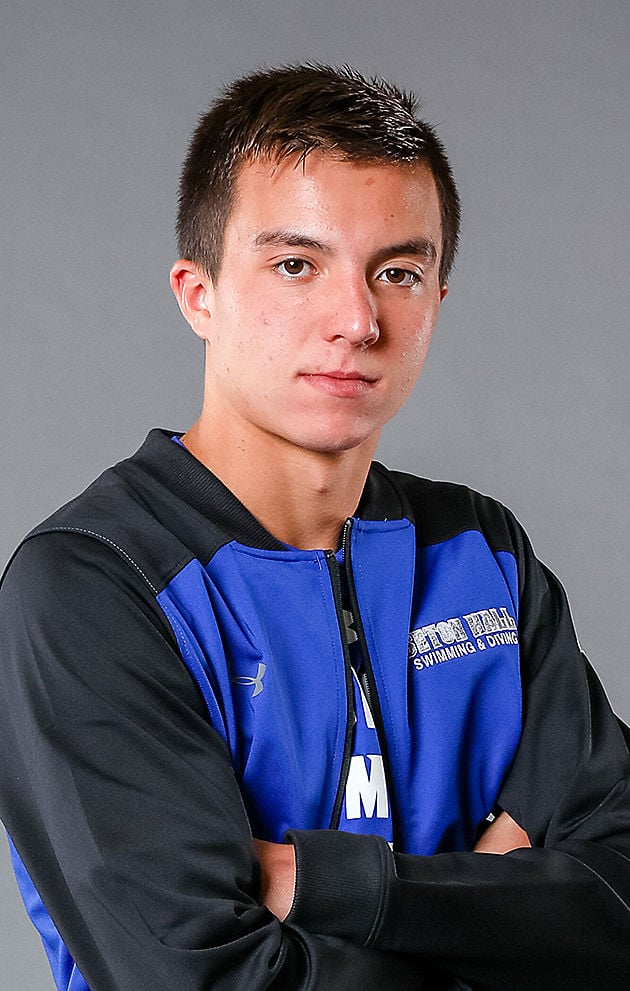 Tom Minar (Oxford), a freshman swimmer at Seton Hall University, won two events and came in second in three more at a tri-meet at the beginning of the month. He was named Big East Conference Swimming Athlete of the Week in mid-January. 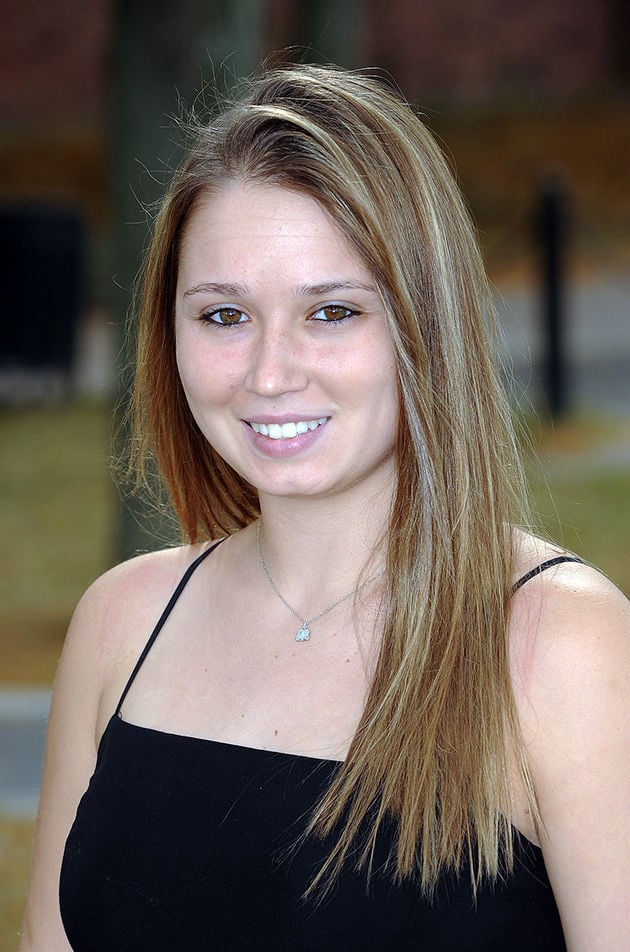 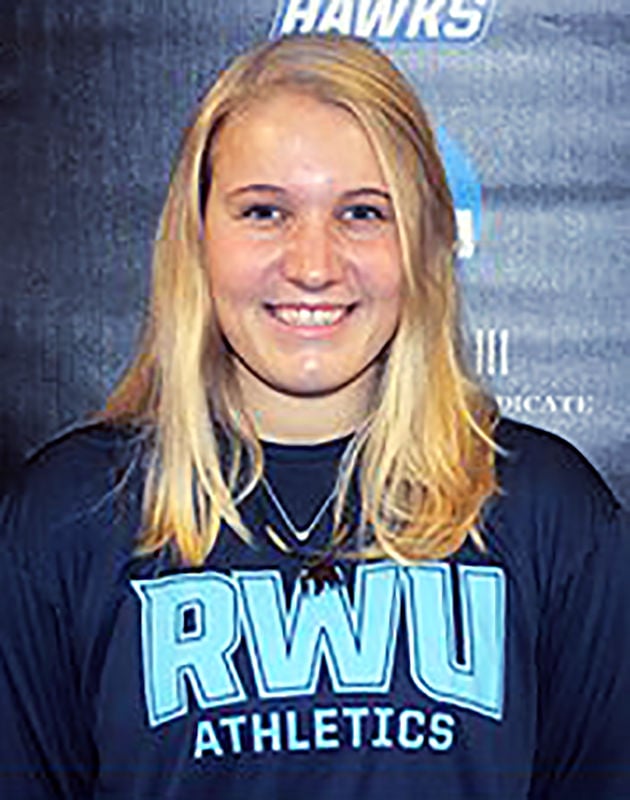 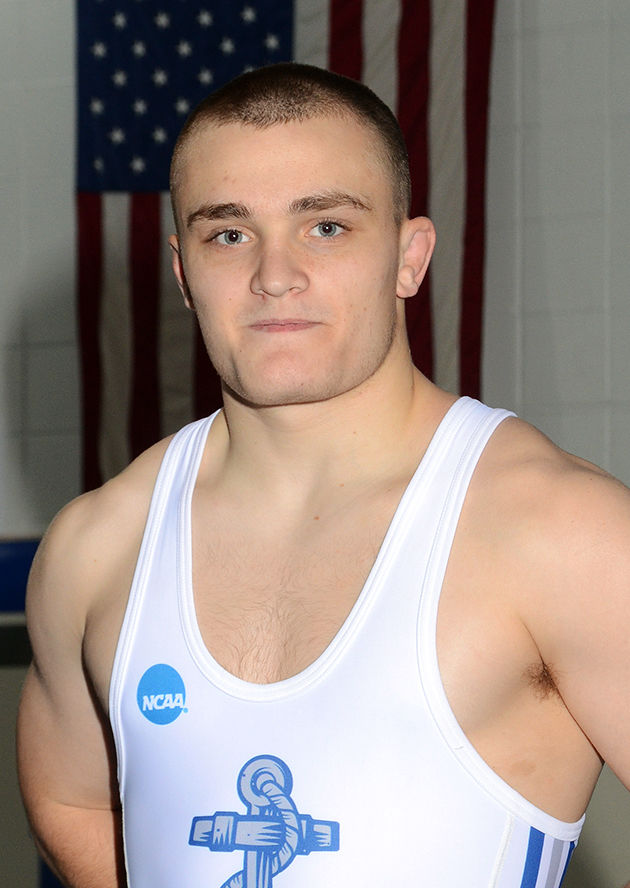 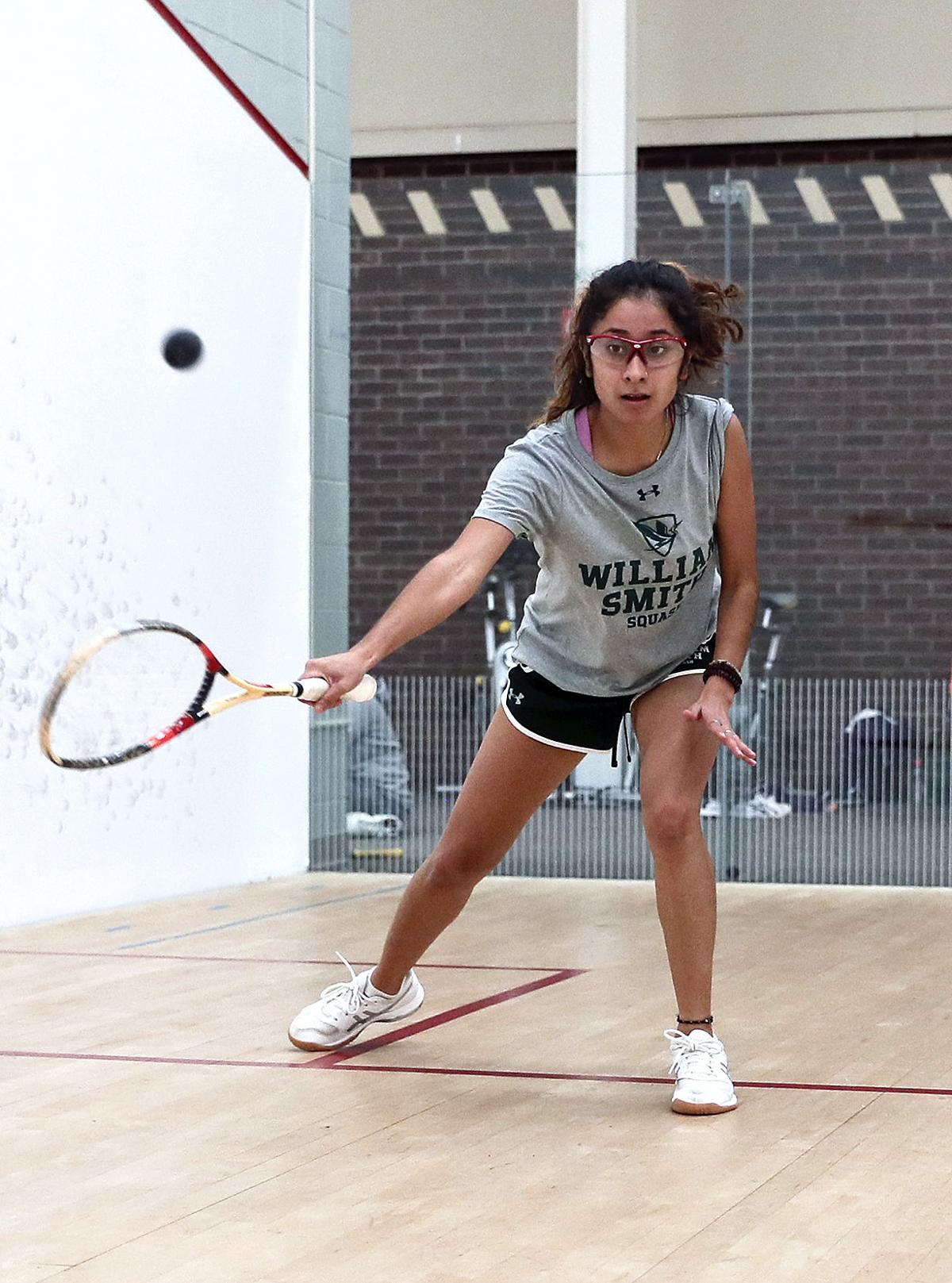 Jo Pacheco (Westover), junior at William Smith College, won a match over the weekend as the Herons stormed through the first two games of the Patriot League Squash Championships. 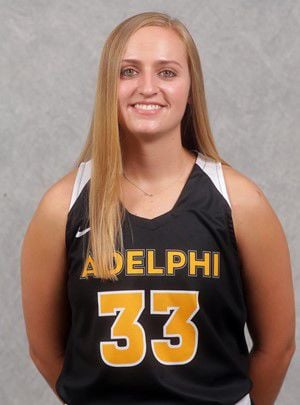 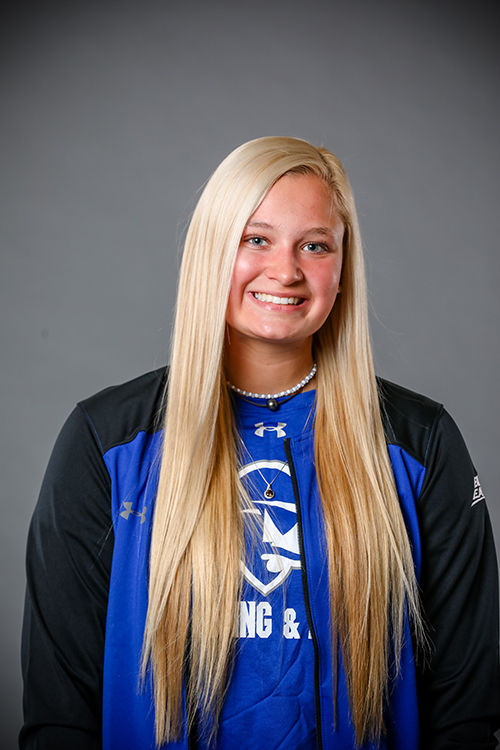 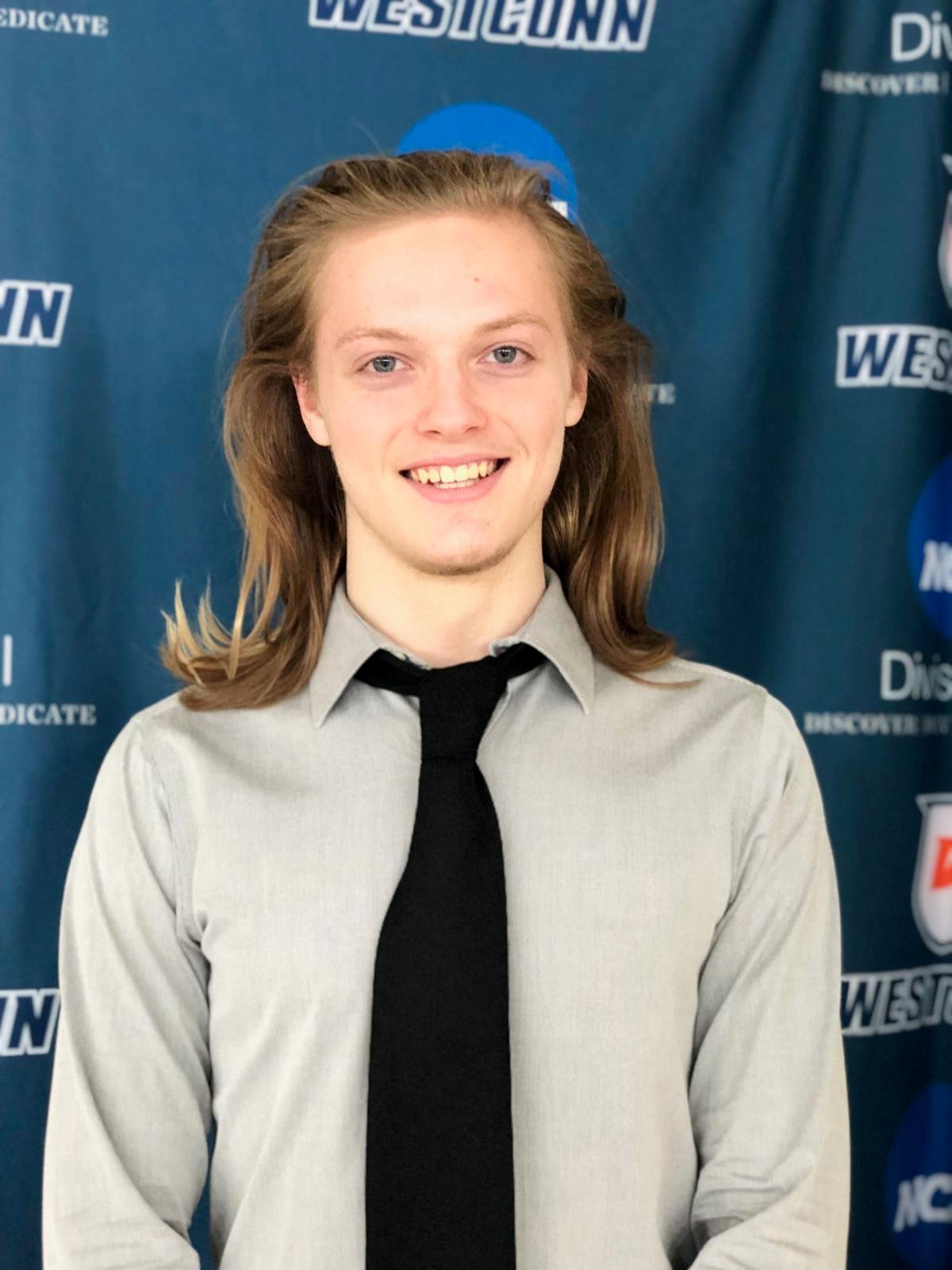 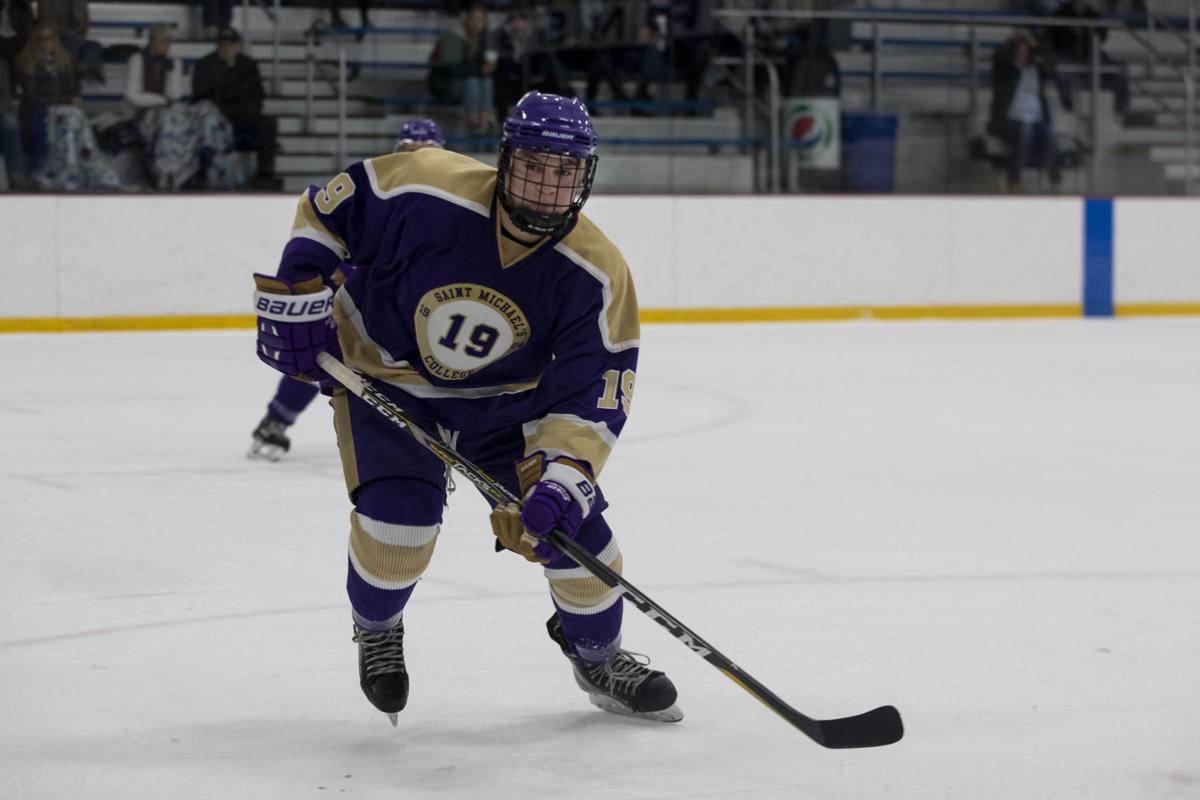 Connor Redden (Southbury/King’s-Edgehill), a freshman forward at Saint Michael’s College, posted his third goal of the season on Saturday as the Purple Knights continued their four-game win streak.

Tom Minar (Oxford), a freshman swimmer at Seton Hall University, won two events and came in second in three more at a tri-meet at the beginning of the month. He was named Big East Conference Swimming Athlete of the Week in mid-January.

Jo Pacheco (Westover), junior at William Smith College, won a match over the weekend as the Herons stormed through the first two games of the Patriot League Squash Championships.

Forget the temperatures and snow: as far as the collegiate sports world is concerned, spring just landed on our doorstep. Mitch Savoca opened the University of Richmond lacrosse season with a hat trick and University of New Haven softball catcher Jovanna Hillman played in four games in Florida over the weekend.

In a five-day stretch in mid-January, the Adelphi University women’s basketball team lost two games, back-to-back, to Stonehill College and St. Anselm College. That was it. Those are the only two blemishes on the Panthers’ record.

Last Wednesday the Panthers won their fifth game in a row since that nasty week in January, 70-58 over American International College. It was the 21st win of the season for Adelphi. Senior guard Mali Klorczyk (Newtown) scored two points in the win over AIC.

Golden Bear senior forward Courtney Carlson (Nonnewaug) put in 10 points, pulled down four rebounds, had two assists and a block in the Gordon game. On Saturday, she dropped in a game-high 21 points and snagged seven rebounds to lead WNEU to its 18th win (11-2 Commonwealth Coast Conference).

Junior guard Ryan Johannes (Pomperaug) got the start for Utica College Saturday afternoon against Alfred University, and when the dust had cleared, the Pioneers had their 17th win of the season, 85-68. Ryan had chipped in a couple of points. Utica is 17-4 (8-2 Empire-8 Conference).

The Roger Williams University women are on the longest win streak of their season (five games) after battling past Endicott College in a character-builder of a contest on Saturday afternoon, winning 60-57 in overtime.

Sophomore starting center Karli Opalka (Pomperaug) swept the boards for a game-high 16 rebounds and scored nine points, blocked a shot, made two steals and an assist. The Hawk femmes are 14-8 (10-3 CCC).

Endicott College’s men were able to go on crucial scoring runs Saturday night, and when those added up, the Gulls were superior to the Roger Williams University guys, 76-66.

RWU starting senior guard Rich Pugliese (Pomperaug) scored six points, made one assist and corralled two rebounds in the loss. The Hawks are now 14-8 (6-7 CCC) with three games left on their schedule.

The Wesleyan University women outscored Williams College in three periods to walk off the Ephs’ court with a 61-52 win Friday night. Freshman guard Maggie Lee (Pomperaug) contributed three points and a rebound to the win for the 12-9 Cardinals (2-5 NESCAC).

William & Mary College standout freshman Carly Swierbut (Newtown) set her third freshman track record in three weeks on Saturday in the 200-meter dash, finishing 11th in a time of 25.12 seconds, breaking a 12-year old freshman mark, and hers is the fourth-fastest W&M time in the event ever.

Susquehanna University junior Alexa Pietrini (Pomperaug) finished 25th (1:08.48) in the 400-meter dash at the Alvernia University Plex Shootout on Friday but ran the second leg of the fourth-place 4-by-400 relay (4:23.31).

Bentley University sophomore Christian Lestik (Newtown) finished fourth in the 800 meters (2:08.01) at the University of Maine Invitational on Saturday.

Southern Connecticut State senior leaper Oghenefejiro Onakpoma (Naugatuck/Coginchaug) finished in third place in the triple jump (14.6 meters) at the New England Championships in Boston on Feb. 1. That was the longest distance by any Division II athlete at the event.

Navy junior Savada Robinson (Oxford) sprinted to a third-place finish in the 400-meter dash (57.94) at West Point on Saturday when the Middies won a satisfying, 93-80 dual meet over Army.

Babson College’s men had an up-and-down weekend, getting shut out by Norwich University, 4-0, on Friday, then coming back on Saturday to roadpave Johnson & Wales University, 11-2.

Senior defenseman Connor Dahlman (Gunnery) fired two of Babson’s 23 shots on Friday, not one of which found the back of the net.

On Saturday, he fired two shots again and got two assists – the first on Ryan Black’s power-play goal at 12:50 of the first period, the next on Patrick Flynn’s second-period score. Those assists were Connor’s 10th and 11th of the season for the 17-4-2 Beavers (12-3-1 New England Hockey Conference).

Saint Michael’s College has manufactured a sudden ice hockey surge, the Purple Knight men on a four-game win streak, with wins in five of their last six games. Over the weekend, the Knights smote Southern New Hampshire twice, 3-0 on Friday night and 6-2 on Saturday afternoon.

Freshman forward Connor Redden (Southbury/King’s-Edgehill) scored one of St. Mike’s five second-period goals on Saturday, getting a helper from Sam Johnson at 6:15. That was Connor’s third score of the season, and made it a 3-0 game at that point. St. Michael’s is now 14-8-2 (10-5-1 NE-10) with two games to play before conference playoffs begun in two weeks.

The Williams College men had their worst weekend of the season, getting edged Friday by Wesleyan, 3-1, and on Saturday by Trinity College, 5-3. Ephs’ junior left winger Tyler Scott (Gunnery) launched three shots on Friday against the Cardinals and was 8-for-16 in face-offs; on Saturday, he got off four shots and was 10-for-19 in face-offs. Williams drops to 13-6-1 (10-4 NESCAC).

Western Connecticut State’s men finished third in the Little East Conference swimming and diving championships on Feb. 1, but sophomore David Lawrence (Newtown) had everybody’s attention as he knifed through the water in the 1650 free, setting a new school record of 17:49.67 and finishing third in the event.

The Seton Hall University swimmers took on Providence College and Georgetown at the Berkeley Tri-Meet on Jan. 31 and Feb. 1 in the last warm-up before the Big East Championships that start Feb. 26.

The Sacred Heart University women wrapped up their dual-meet schedule on Feb. 2 with a 155-144 win over St. Francis College of Brooklyn.

Sacred Heart will contest the Northeast Conference Championships that begin next Wednesday.

After the first three days of the Northeast-10 Conference Swimming and Diving Championships, the Southern Connecticut State women and men were in second place — the women just 18 points behind Assumption College, and the men 163 points back of Bentley University. The Owl women had led for the first two days of the event.

Seven local athletes were in the water for Southern.

As for Assumption College’s women, junior Grace Gustinis (Masuk) began the event on Thursday by swimming the third leg of the third-place 800 free relay (7:39.15).

Springfield College finished its dual-meet season on Feb. 2 with a 166-110 loss to Amherst College.

Trinity College senior Julia Albino (Pomperaug) was busy in the pool at the unusual Worcester Polytechnic Tech Sprints on Feb. 1.

Boston College freshman Aleksej Cupic (Seymour) recorded an 11th-place finish in the 200 breaststroke (2:16.01) and came in 16th in the 100 breaststroke (1:01.13) at the Boston University Winter Open on Saturday.

University of Richmond junior lacrosse midfielder Mitch Savoca (Newtown/Fairfield Prep) scored three goals but it wasn’t enough for the Spiders, who dropped a double-overtime, 14-13 battle to fourth-ranked Maryland on Saturday in the season opener for Richmond.

Mitch scored the first goal of the season at 12:56 of the first period, unassisted, and did it again a minute later to give the Spiders a brief 2-0 lead. He got his third goal at 3:23 left in the half, with Todd Gallagher making the assist. At that point, Richmond still had a two-point lead, 7-5. The Terrapins outscored Richmond 6-2 in the final stanza to tie the game, winning with 2:12 remaining in the second overtime. Mitch took eight shots overall and picked up one ground ball.

Villanova University picked up two wins in its first three games at the River City Leadoff Tournament in Jacksonville, Fla. over the weekend. The Wildcats survived a tight first game with San Diego State on Friday, 5-4, then lost to to the Aztecs Saturday morning, 8-4, and came back to claim a win over Jacksonville University, 10-2, in the afternoon.

Sophomore pitcher Sara Kennedy (Newtown) finished the second San Diego game, allowing four hits and two runs in the seventh inning, striking out one and walking none. She did not factor in the decision.

The University of New Haven Chargers split their first day of the 2020 softball season in Viera, Fla. on Friday, dropping an 8-0 decision to West Florida, then coming back to beat Palm Beach Atlantic, 6-3, at the Florida Tech Invitational, played on the USSSA Space Coast Complex.

Junior catcher Jovanna Hillman (Seymour/St. Joseph’s) batted 0-for-2 in the first game but came through with an RBI single in the sixth inning and scored twice.

Seton Hall University freshman Tom Minar (Oxford) earned Big East Conference Swimming Athlete of the Week on Jan. 21 after he guided his team to a 181-117 victory over Delaware with two individual victories and two relay wins.

Have news about a local athlete who is competing in a spring college sport – baseball, softball, lacrosse?

Our lacrosse and softball coverage began this week. Baseball is next.

Please send us a note at john.addyman@yahoo.com.

Tell us the name of the player, sport, hometown and high school and we’ll take it from there.